Foresight training for the Parliament

Foresight training for the Parliament 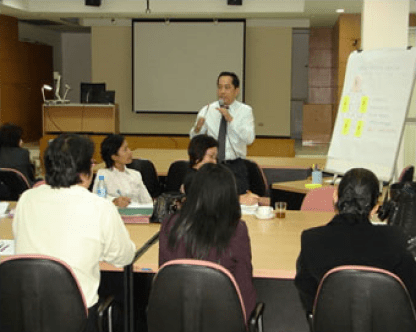 APEC CTF regularly organizes comprehensive training workshop on foresight to promote the foresight methods to interested organizations, both in private and government sectors. In early-mid 2009, such foresight training was conducted on the agreement with Thai Parliament Office. The parliament foresight training workshop was hence set up in 4 sessions, specifically on 7 and 24 April, 15 and 29 May 2009 at Thailand Parliament Office. The 32 participants were Thailand parliament senior officers who will be promoted to executive level. The workshop started with lecture on foresight concept and methods, for instance scenario planning and Delphi study. There were some real practices on Real-Time Delphi survey, following by scenario building under the topicof “possible scenarios of Thailand parliament office in 2019”. The results of the workshop demonstrated their better understanding and thinking process toward foresight concept plus their ability to initially apply foresight theory onto their project.